The criticism that bacteria and/or viruses are incapable of surviving under the harsh conditions of space is certainly not borne out by all the data that has accumulated over the past three decades. Bacteria and viruses embedded in minute grains of rock, dust, carbonaceous material, or ice, are protected effectively from radiation damage and can remain fully viable for millions of years under space conditions.

Microorganisms including virions deep frozen within cometary bodies could remain viable indefinitely, and certainly for cosmological timescales. Recent space experiments including those conducted aboard the International Space Station have shown remarkable survival properties of bacteria and viruses.  Cause of Cambrian Explosion – Terrestrial or Cosmic?

If you are interested in Covid from Space, this is your summer reading. While it is preceded by a variety of other recent articles, and many hundreds if you include the wider literature of Panspermia, these four publications are the starting point for truly understanding Covid. They tell us more about the disease in one fell swoop than all the other global science pubs since January 2020 combined.

But they don’t tell us everything. To learn the rest of the story — or anything approaching it — these papers will need to be “accepted” as legitimate despite their revolutionary thinking. Nothing much of relative importance can be further discovered about Covid-19 unless and until you start with the work right here of Steele, Wickramsinghe, et al.

Despite a half century of Hoyle and Wickramasinghes suppression. and the large swath of experts and their disciplines that would be permanently humiliated, the Tusk believes the recent papers will be accepted — and sooner rather than later.

The arc of science bends towards truth. And in this case perhaps quickly, if one puts aside the previous five decades of delay.

Whilst there is certainly no groundswell of disease from space adherents, Panspermia in general is being verified on a regular and increasingly frequent basis using modern instruments and long delayed experiments. It will not be too long now before the frustration with Covid ignorance, and global surprise by overwhelming evidence for the omnipotence of dessicated and hibernated microbial life in space, will converge to overturn Aristotle and Darwin’s warm little pond.

And at long last we will reposition the earth as a part — not the start — of life. 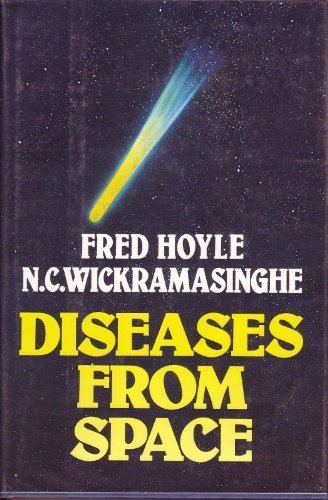 A quick summary of the science from Dr. Ted Steele:

Our explanation is that the virus arrived as fragmented meteorite dust in the stratosphere over China (Oct 11 2019), striking Wuhan within a few weeks, then much of this dust load was then caught in in the upper troposphere/lower stratosphere Jet-Streams and taken East to West coming down in quick succession in Tehran/Qom, Lombardy/Italy, Spain and then New York City ( by early- to mid March 2020). The latter NYC strike we predicted in advance as this East-> West progress was along the 40o N Latitude band. The viral laden dust clouds (bearing the source COVID-19 virions) have since fragmented and become patchy striking many European and North American regions, and the dust clouds have also entered the Southern hemisphere (Brazil, much of South America, South Africa, Australia, and New Zealand, and currently engaging French Polynesia. But other Asian countries are also engaged (Pakistan, India, recently Sri Lanka) and also many other regions, but it seems to a variable lesser extent from public case records (Japan, South Korea, Taiwan, Philippines)

Thus we are scientific experts that bring together a coherent string of causal evidence covering the totality of factual data at all key levels: genetic, immunologic, epidemiologic, geophysical, astrophysical and astrobiological explanations as this pandemic has unfolded in real-time. Our papers can be read as a chronological scientific testimony of the evidence supporting this explanation (Two of our earlier papers just prior to the pandemic ironically also “predicted” such a Panspermic event and sets the stage for our ability to track the virus- see last two reference URLs below).

Thus we can provide all the key scientific evidence on COVID-19 origins. The medical and scientific advisors to the government have the completely wrong infection model (P-to-P exclusively) in their collective heads.

There is another assumption about the origins of the COVID-19 virus that can be disposed of.

In a key paper we address the popular myth that COVID-19 and other diseases like influenza are zoonotic, i.e. they are emerging constantly from infected animals (zoonotic diseases).  These claims are not actually supported by any direct evidence, and the evidence that is available bearing on the issue is actually very weak and certainly does not support this mainstream conception.