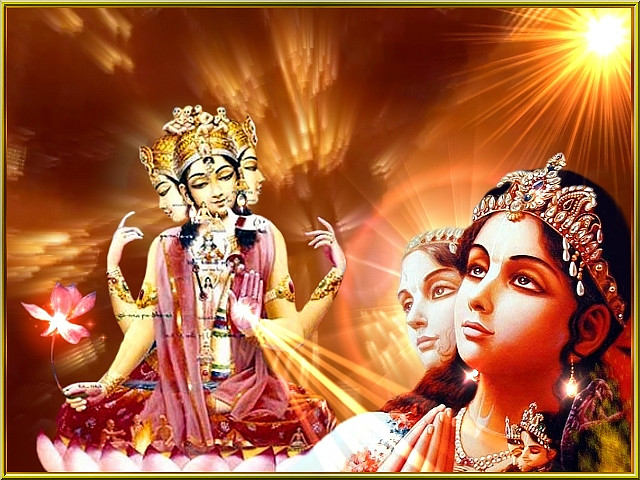 A friend of the Tusk sent me a fascinating website, The Meaning of the Vedas, stating the hypothesis of Mr. Ravindra Vasudeo Godbole that the origin of the ancient Vedic oral literature of India and Pakistan was the trauma of repeated bombardments from the Taurid cometary debris stream (so well described by Bill Napier and blogged here on the Tusk). To properly critique the argument, one would have to be Vedic scholar, which Godbole clearly is — and I am not. But from the peanut galley it sure appears to be a well considered proposition.

From The Meaning of the Vedas:

1.            The hypothesis is based on the theory of coherent Catastrophism put forth by astronomers M/s. Victor Clube, Bill Napier, and David Asher.

3.            This comet disintegrated around 7000 B.C. It caused some catastrophic events on Earth, like crater formation, trenching and flooding due to Tsunami waves.

4.            As a result of intense heat generated during meteoric impacts, natural glass was formed on the surface of earth.

5.            A bright comet was then visible from earth. The next four millennia were a period of celestial peace and human cultural development from Stone Age to Bronze Age.

6.            This comet further disintegrated around 3100 B.C.  A series of 5 to 7 bright comets were visible in the sky for a period of few centuries.  This disintegration also resulted in creation of a belt of asteroids and dust.  This belt is known as Taurids and is still the cause of increased meteor falls in the first half of the month of November when earth intersects the Taurids orbit.

7.            The orbit of Taurids is in a 7:2 resonance with planet Jupiter.  The gravitational effects of this massive planet cause this orbit to rotate slowly around its own axis.

8.            Because of this orbital precession, Taurids directly intersect earth’s orbit after a period of around 2500 years.  This is a period of destruction due to bombardment of meteors of various sizes and in different locations on earth.

10.          Comet Encke-P2 is the largest remnant of this celestial turmoil and is still visible through a powerful telescope.  It was visible to the naked eye till the end of 18th century.  This comet completes its rotation around the Sun in 3.3 years.

11.          The deductions mentioned above are based on actual observations, mathematical calculations and computer modeling. The researchers are qualified scientists and their papers are published in journals of repute.

12.          For the purpose of present hypothesis, the theory put forth by these astronomers is taken to be true at its face value.

The record of this celestial turmoil is available to us in different forms, but has not been looked at with the correct perspective.  Following are some of the important sources.

2.            Presence of a large number of salt playas and salt water lakes like   Sambhar and Didwana in deserts of Rajasthan.

3.            Newly emerging evidence of presence of impact craters in the region extending from Saurashtra to Kasmir.

4.            Disappearance of mighty Saraswati River and changed courses of rivers Yamuna and Sutlej.

It’s summer and posting YouTube videos is certainly in order. Here’s a good one I had…
END_OF_DOCUMENT_TOKEN_TO_BE_REPLACED
108
Share