Tom Stafford was an expert among experts at the Fall Meeting.  I became aware of Tom Stafford when Redefining the Age of Clovis: Implications for the Peopling of America was published in Science in 2007.  He is the Former Director of the Laboratory of AMS Radicarbon Research at University of Colorado.  And for more than decade he has been President of Stafford Research Laboratories — the nation’s top private dating laboratory.  He is to be taken seriously when, among other things, he tells you how old something is.  I was looking forward to his presentation more than any other at the Fall Meeting.  I was not disappointed.

Tom — who has never previously published with the YD team — laid out a very, very, tight and narrow layer of evidence supporting the purported event.  In short, 151 centimeters below the surface at the pefectly stratified Hall’s Cave Paleo site in Texas was a 1 to 2 cm layer of dirt that was host to trillions of nanodiamonds and high levels of soot known as aciniform.  Not above — not below. 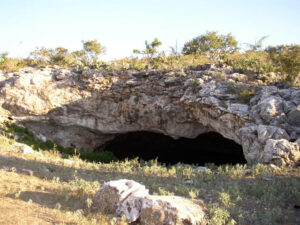 Background article on Texas Hill Cave studies:
The sediments in Hall’s Cave were deposited fairly continuously over at least the last 17,000 years. The cave contains the best sequence of latest Pleistocene through Holocene sediments and bone of any Texas cave, and it certainly ranks as one of the excellent sequences in the United States. The temporal control is unrivaled with over 100 radiocarbon determinations from the sequence (Stafford and Toomey, in prep)
Vertebrate Paleontology of Texas Caves by Rickard S. Toomey, III

Tom then gave several slides and narrative  regarding the quality of the sampling at Halls Cave, and the nature of samples taken along the Younger Dryas period, showing clear peaks of markers overlaid on an actual photos of the stratified cave sediment wall. According to Tom, each centimeter you go down you can click off fifty years (at that level).

Tom said that the nanodiamond and aciniform evidence is unequivocally associated with the beginning of the Younger Dryas.  He also pointed out that at Hall’s Cave, no more Megafauna is found above the very layer identified by the nanodiamonds.

He went to on to share — in a slightly astonished manner — the nature of the stranger nanodiamonds at Hall’s Cave.  He said that Hex-Diamonds (those pesky ones that only come from space), the N-Diamonds and P-Diamonds were all found and photographed at Hall”s Cave.  He showed one photo of a perfect diamond sphere “lattice” made up of 3000 “twin” diamonds of i-carbon.  Pretty weird stuff to find in a Texas Hill Country cave.   Pretty weird stuff.

He concluded with the following slides:

Peaks in nanodiamonds and aciniform carbon occur at 151-153 centimeters.

Upper boundary is sharp base is gradual.

A DISTINCT CHRONOGRAPHIC STRATUM IS PRESENT AND DATES TO THE BEGGING OF THE YOUNGER DRYAS.

Sample 10 cm above 10 cm below horizon

Analyze for ET proxies at 25 intervals betwen 0 and 18 KA over cave’s 3.7 meter thickness.

My take: Why on earth would this man suddenly join the YD Team at AGU — out of nowhere and not previously published with them — unless he had truly found something extraordinary in the course of his own work — and somewhat contrary to his own experience!?  The modern YDB hypothesis (non-Platonic) is hardly ten years old.  Despite intermittent attention it has suffered near ceaseless rock-throwing, drive-by commentary and half-baked popular and professional press articles [links to come].

At this point — even if it is a ‘cool theory’ — you don’t jump up for the fun and attention.

Nope.  Tom Stafford did the right thing by helping out someone else’s investigation by using the best tools on his best site.  Even better, what he he found was very specifically predicted by the YDB team.  That the way it is supposed to work — and it tells us something.

Testing Younger Dryas ET Impact (YDB) Evidence at Hall’s Cave, Texas
AU: Stafford, T W
EM: [email protected]
AF: Stafford Research, Inc., Lafayette, CO, United States
AU: Lundelius, E
EM: [email protected]
AF: Dept. of Geological Sciences, Univ. of Texas, Austin, TX, United States
AU: Kennett, J
EM: [email protected]
AF: Dept. of Earth Science & Marine Science Institute, Univ. of California, Santa Barbara, CA, United States
AU: Kennett, D J
EM: [email protected]
AF: Dept. of Anthropology, Univ. of Oregon, Eugene, OR, United States
AU: West, A
EM: [email protected]
AF: GeoScience Consulting, Dewey, AZ, United States
AU: Wolbach, W S
EM: [email protected]
AF: Dept. of Chemistry, DePaul Univ., Chicago, IL, United States
AB: Hall’s Cave, Kerrville County Texas, 167 km WSW of Austin, provides a unique opportunity for testing the presence of a chronostratigraphic datum (YDB layer) containing rare and exotic proxies, including nanodiamonds, aciniform soot, and magnetic spherules, the origins of which remain controversial, but possibly derive from a cosmic impact ~12,900 CAL BP. The karst-collapse cave in Cretaceous limestone on the Edwards Plateau contains ≥ 3.7 m of stratified clays grading to clayey silts recording continuous deposition from 16 ka RC yr to present. The cave’s small catchment area and mode of deposition were constant, and the stratigraphy is well dated based on 162 AMS 14C dates from individual vertebrate fossils, snails, charcoal, and sediment chemical fractions. The cave sequence contains an abundant small animal vertebrate fossil record, exhibiting biostratigraphic changes, and the timing of the late Pleistocene megafaunal extinction is consistent with that elsewhere in North America. At 151 cm below datum is the extremely sharp, smooth contact separating lower, dusky red (2.5YR3/2) clays below from overlying dark reddish brown (5YR3/3) clays (forming a 20-cm-thick dark layer) and dating to 13,000 CAL BP, at or close to the age of the YDB datum elsewhere. This appears to be the most distinctive lithologic change of the deglacial sequence. Sediments at or within 10 cm of this contact contain the local extinction of 4 species of bats, the local extinction of the prairie dog (Cynomys sp.) and perhaps other burrowing mammals in response to decrease in soil thickness, and the uppermost occurrence of 6 late Pleistocene megafaunal taxa that, although rare in the cave, do not extend younger than 12.9 ka. We collected and analyzed sediments at high resolution above and below the distinct lithologic contact at 151 cm. The red clays from 151 to 153 cm and immediately preceding the lithologic contact contain an abundance of nanodiamonds (5 different allotropes), aciniform soot at 2400 ppm, magnetic spherules, and carbon spherules, all of which we interpret as evidence for a unique chronostratigraphic marker (YDB) in the Western Hemisphere. Because the age of this horizon is ~ 13,000 CAL BP, we interpret the age of the event as the beginning of the Younger Dryas cooling. Regional soil erosion began ~15,000 CAL BP and continued until 7000 CAL BP, but dating suggests that there is no discontinuity or hiatus in deposition, and thus, the exotic materials in that layer are not considered to be erosional accumulations. Future analyses include sub-centimeter sampling over the YD boundary, quantification of nanodiamonds and other event-proxies within 1000 yr of the boundary and in sediments several 1000 years older and younger, continued refinement of the AMS

It’s summer and posting YouTube videos is certainly in order. Here’s a good one I had…
END_OF_DOCUMENT_TOKEN_TO_BE_REPLACED
81
Share