You would think the Tusk and Marc Young’s effort to develop an easily accessible, comprehensive bibliography of all peer-reviewed literature concerning the Younger Dryas Impact Hypothesis would prove a pretty uncontroversial matter. Indeed the effort might be appreciated by anyone interested in the subject, regardless of their support for the published evidence of global cataclysm ~12,872 years ago.

Nope. Dr. John Hoopes, a well-schooled Anthropologist from the University of Kansas, engaged in a lengthy and tedious twitter attack on The Bib — insisting the list should include citations for all books and written speculation concerning historic cosmic catastrophes regardless of their peer-review status.

Here is how he starts the fray:

Hoopes believes The Bib is biased unless it incorporates non-peer reviewed books and papers from throughout the long history of Catastrophism. 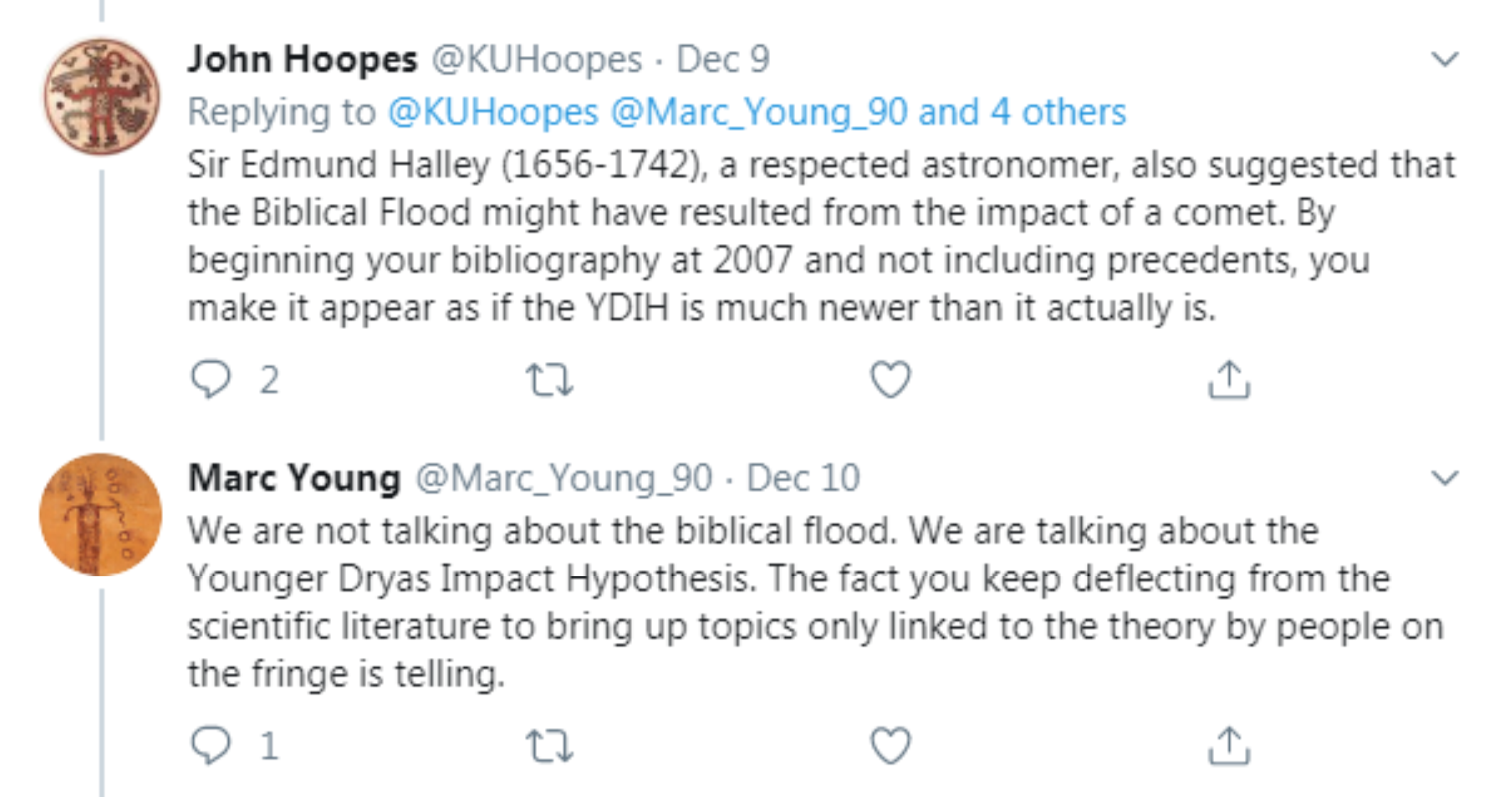 What a crock. The Bib — like any bib — began with a set of objective criteria. In this instance, the criteria are very straightforward: All peer-reviewed journal publications or conference poster presentations concerning the Younger Dryas Impact Hypothesis since the Comet Research Group’s first paper in 2007.

Creating a ‘Catastrophism’ bibliography, as opposed to a list of peer-reviewed ‘YDIH’ works, is certainly a noble endeavor. That’s why the Tusk maintains one.  Mr. William Thomson’s masterpiece bibliography is hosted exclusively at the here since 2011 and is linked permanently on my right drop down menu.

Hoopes insistence that there should be no distinction between these two archival and reference efforts is an insincere ‘troll’ by an established academic. While this kind of foolishness is common on Twitter, it reflects very poorly on Hoopes, and by extension the University of Kansas. He has allowed his crusade against pseudoscience to distort his judgement so completely that he will attack an objective presentation of modern science in action.

Hoopes does not say it directly — this is a troll of course — but his agenda is driven by his horror that any peer-reviewed support for geologically modern global catastrophe may lend circumstantial support for non-peer-reviewed popular speculation (as from Graham Hancock).

It’s as if a baseball fan, disappointed with his team’s record, insisted the other team’s stats include all previous sand lot games and each players’ record in the minors.

What kind of anti-science zealot attacks a bibliography of peer-reviewed science on a discreet subject? A desperate person. A person on the wrong side of a publishing arc, clearly bending toward truth, which threatens to destroy their personal agenda, worldview and teaching.

Below is an image showing the entire Twitter exchange. Marc Young is the principle author of the Bib, and makes a valiant effort in the face of an ugly troll.

**This Twitter debate between myself and John Hoopes contains multiple references by myself to pseudoscience and fringe theories. I want to make it clear that I respect the little fingers of each and every single person publishing work on the YDIH more than every bone in Hoopes’ body. My use of these terms and implications I make are intended to allow me to argue on his level, and are not a reflection of my feelings towards the hypothesis. However, they are also objective terms for the subject matter under the definitions they use. A theory being on the fringe has absolutely zero bearing on their veracity and truth, for example Heliocentrism was once a fringe theory. Likewise, something being pseudoscientific also has no bearing on how true it is, it merely means there is not a lot of scientific evidence to back it up, or the evidence has been misused in the eyes of the accuser. I am a fan of Cosmic Cycles by Firestone & West, the only reason it’s not on there is because of all the other non-YD impacts it links to the YD,  – Marc Young** 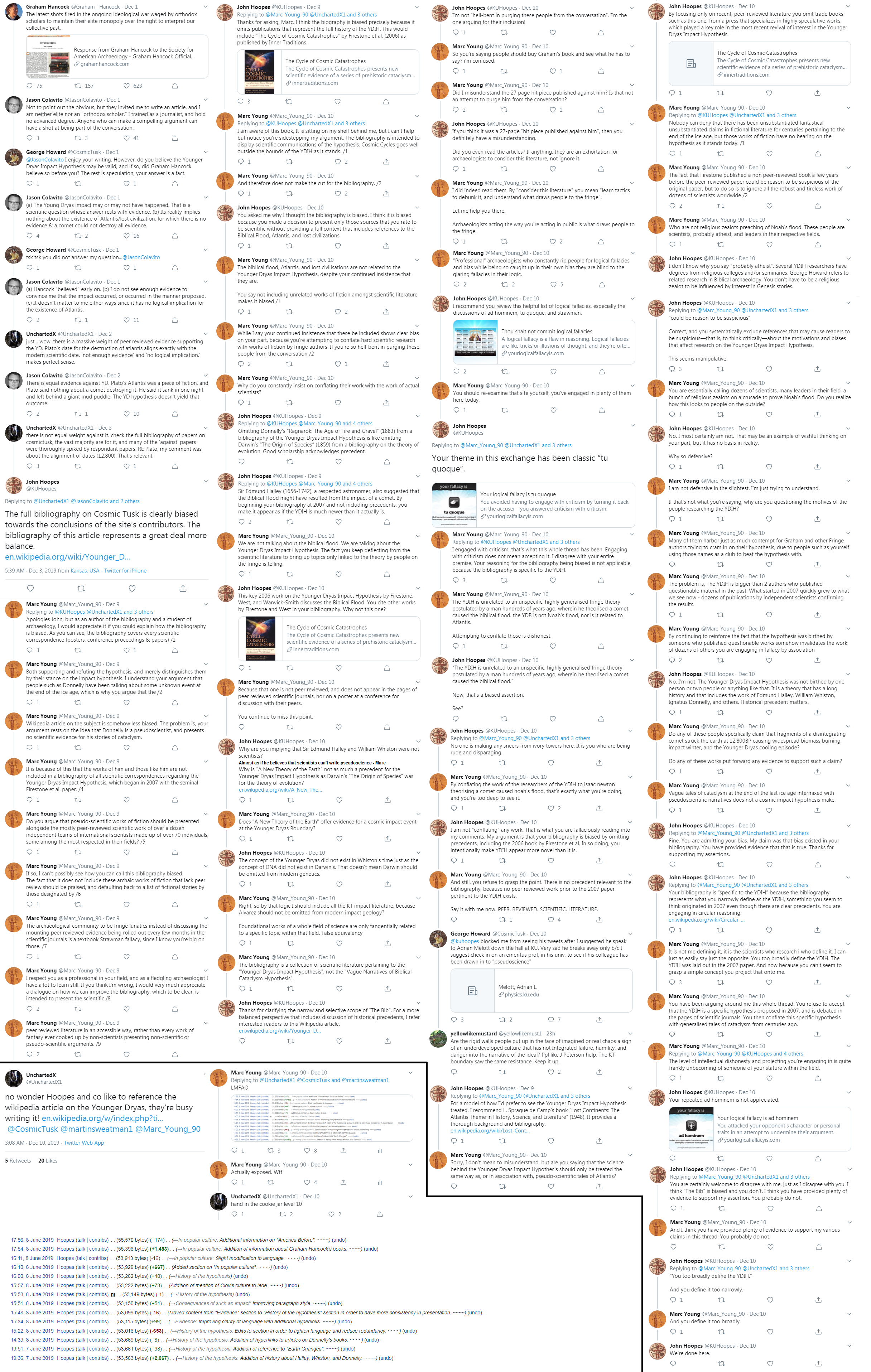 It’s summer and posting YouTube videos is certainly in order. Here’s a good one I had…
END_OF_DOCUMENT_TOKEN_TO_BE_REPLACED
116
Share